A New Chapter in Leadership of the Scottish Fiddle Orchestra 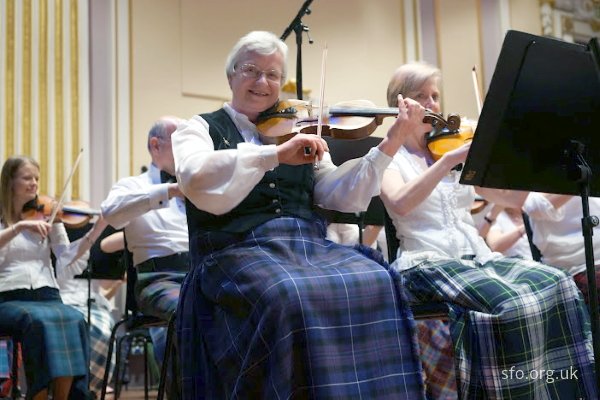 Yla Steven BEM becomes only the third leader of the Scottish Fiddle Orchestra in its 40-year history.

As a founder member, she follows in the footsteps of Willie Dunlop and the recently dearly departed Bill Cook.

Yla was born in Edinburgh.

Her Christian name is the original spelling of Glen Isla in Perthshire, where she lived in her early years.

She began learning the violin in Edinburgh at the age of seven, continued her studies in Blairgowrie, and later graduated from the Royal Scottish Academy of Music and Drama.

A strong interest in Scottish traditional fiddle music developed at an early age, and she entertained at many events during her teenage years.

In Blairgowrie she was taught by Harry C. Ogilvie, whose father had taught leading fiddler and bandleader Ian Powrie. Another link with Ian is that they both attended Bendochy Primary School.

Yla competed at all the major Fiddle Festivals in Scotland.

She won Championship Awards at Kirriemuir, Banchory and Aberdeen.

In 1976, she was the first winner of the Daily Record’s Golden Fiddle Award, in Glasgow.

En route to these successes she was mentored by Sandy Milne of Banchory and many other great fiddlers, like Hector McAndrew and Tom Anderson.

Yla is now most renowned for her beautiful playing of slow airs which has won her many accolades at home and abroad.

Yla is at the heart of the traditional music scene in Edinburgh.

For almost forty years she taught violin, viola and cello for the City of Edinburgh Council.

She founded the multi-award winning Lothian Schools Strathspey and Reel Society and is currently Musical Director of the Edinburgh Highland Reel and Strathspey Society.

In 1977, she played as part of “An Edinburgh Fancy” in the King’s Theatre, Edinburgh at a Silver Jubilee Concert for the Queen and Prince Philip. There have been other “Royal” performances for our Patron, The Princess Royal, and for Prince Philip. She has also played for violin greats such as Yehudi Menuhin, Max Rostal and Yfrah Neamen.

In 1980, Yla was a founder member of the Scottish Fiddle Orchestra.

She was delighted when John Mason invited her to become its principal soloist.

With the SFO, Yla has had the opportunity to perform all over Britain, from Lerwick in Shetland to the Royal Albert Hall, London. She has toured with the SFO to Canada, Ireland and China and will lead them back to North America in 2020. Yla has performed in most of the great concert halls throughout Britain, performed on radio and television and has numerous recordings to her credit.

Yla Steven’s huge contribution was recognised with the award of the British Empire Medal in 2015 for Services to Scottish Music.

The Scottish Fiddle Orchestra could have no better person in place to lead them into their 40th Anniversary year.

Note: The original version of this article appeared in the SFO Newsletter for December 2019. Why not sign up to become a Friend of the SFO (it’s free of charge) and you will automatically receive new Newsletters as they become available (every 3 months or so).