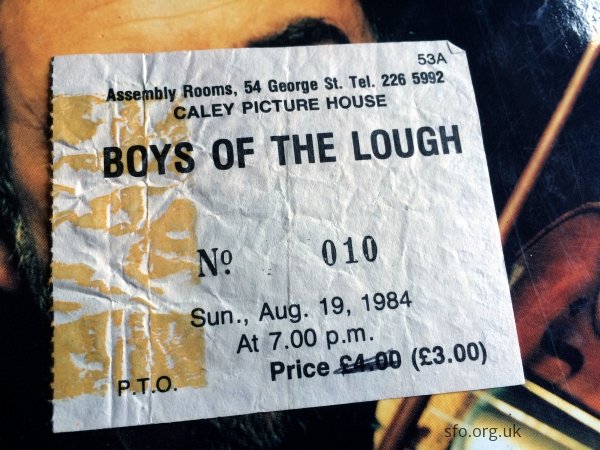 Aly Bain helped get me through my Highers.

A cassette recording of the album “Open Road” by Boys of the Lough was the soundtrack to much of my revision.

At that time, the Boys were a four-piece band, featuring Irishman Cathal McConnell and Northumbrian brothers, Dave and Tich Richardson, alongside Aly.

Though Aly’s Shetland music certainly featured, the bulk of the Boys’ repertoire was (and still is, today) Irish music. The album includes sets of driving reels and jigs, including the first recording of Dave Richardson’s ‘Calliope House’ (first and last tune in the set), these days a staple of sessions all over the world – and part of a set of jigs in this year’s SFO programme.

Sketch of Boys of the Lough c.1983 by Peter Toseland (‘Open Road’ sleeve)

Open Road has a track where Aly is accompanied only by Tich Richardson on guitar. ‘The Dying Year’ and ‘Madame Vanoni’ are described in the sleeve notes as: “Two fiddle tunes which highlight the demanding technique required for much of the Scottish repertoire.”

“Brechin violin teacher, J.D. Michie, … wrote the beautiful air The Dying Year in 1935 for his pupil Angus Fitchet. An unusual hornpipe by J. Scott Skinner in the key of Bb, Madame Vanoni can be found in the ‘Harp and Claymore’ collection. The tune features artificial harmonics, of which Alastair Hardie, in his ‘Caledonian Companion’ comments: ‘These are produced by stopping the 1st finger firmly on the string and by touching lightly with the 4th finger a perfect 4th above. The resultant note sounds two octaves above the stopped note.”

The tune Madame Vanoni also features spiccato – or ‘bouncing’ – bowing, giving the tune great vibrancy and lift. The two melodies, taken together, are an excellent display of Aly’s technical mastery of his instrument, whether he is playing a slow or a fast tune.

Spiccato bowing also features in what was probably regarded as Aly’s signature tune for many years – The Hangman’s Reel. He must have played this traditional French-Canadian reel thousands of times in concerts, often as an encore. The fiddle is retuned from to AEAC# to get the proper effect and the tune also features left-hand pizzicato. Such ‘plucking of the strings’ is normally done using the right hand, and the left-hand technique – certainly as featured at the speed of The Hangman’s Reel – is beyond the dreams of most fiddlers.

The first time I ever saw Boys of the Lough in concert was at the Edinburgh Festival Fringe in August 1984. I still have the ticket and, on the back of it, I wrote the names of the band members and also the comment: “The Hangman’s Reel was most memorable.”

Sadly, that was to be one of the last concerts by that line-up of the band because Tich Richardson was killed in a road accident in September 1984.

Towards the end of 1984, Aly went on to record his first solo album. The definitive version of The Hangman’s Reel was included, with accompaniment by Peerie Willie Johnson on guitar. 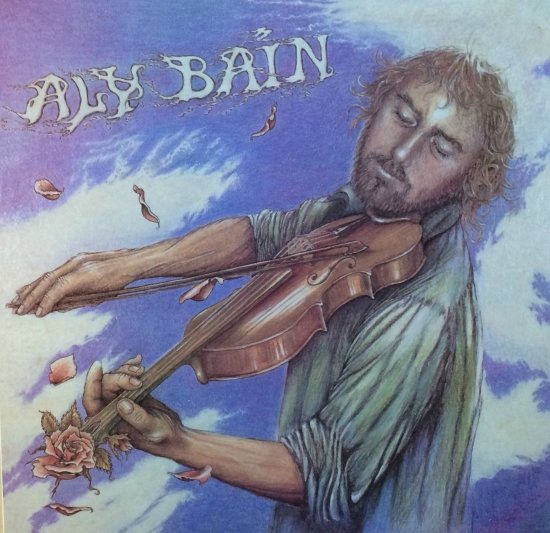 Boys of the Lough returned with a 5-piece band in 1985 and Aly continued to tour and record with the band until 2002. He also formed a partnership with accordionist and multi-instrumentalist, Phil Cunningham, and as a duo they have now achieved ‘national treasure’ status.

Their sense of fun is reflected in everything from their album titles (e.g. ‘The Pearl’, ‘The Ruby’ … ‘Another Gem’) to their stage show and it is no criticism to say that audiences now look forward to the hilarious patter and yarns between each set of tunes as much as they look forward to the pair’s playing and musicianship.

As an ambassador for Shetland and Scottish traditional music, Aly is probably unrivalled and his ‘solo’ projects for television include: Down Home; Aly Bain & friends; Aly Bain meets the Cajuns; The Shetland Sessions; and (with Jerry Douglas) The Transatlantic Sessions.

Another national icon, Billy Connolly, was interviewed by Alastair Clark for his 1993 biography of Aly, ‘Fiddler on the Loose’. Billy and Aly were both part of the Scottish folk scene in the late 1960s and had been friends since that time.

Considering the success which Phil and Aly have gone on to have over many years, Billy Connolly was perceptive in his comments at that time: “[Aly] was the first great instrumentalist and the best ever. There’s just one Aly in every generation. For me, Aly is Miles Davis. He’s Ravi Shankar. He’s Bella Fleck. He is in that number and he’s completely unaware of it. That’s what gives him this lovely strength and that’s what will sustain him forever.”

“After Aly, the only other guy I can think of who took my breath away and who could do something I’d never seen in my life before is a guy called Cunningham and he plays the accordion.”

“Nobody shone like Aly, or the Cunningham guy later. And Aly’s still shining. Ask the people out there in the streets how many fiddlers they know. His name’s first on the lips every time. That’s an amazing achievement. Like all the great players have done, he’s made people like not just the music he plays but the instrument itself.”

A quarter of a century on from Billy Connolly’s comment about Aly being the best-known fiddler, I thought it would be interesting to test how well that theory holds true today.

I emailed my work colleagues the following question:

If I ask you name a famous Scottish fiddler, living or dead, what is the first name that pops into your head?

I said that any answer was allowed, including ‘none’. Out of 40 emails sent, I got 22 replies and the results were as follows: 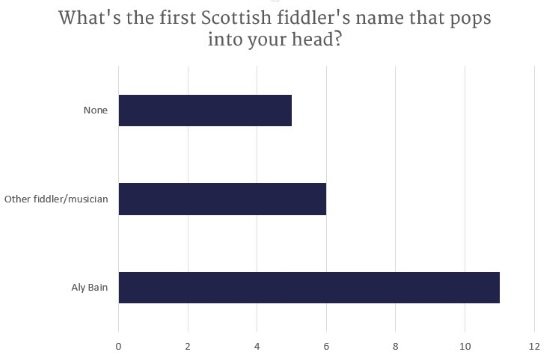 It is striking that, not only is Aly Bain the best-known Scottish fiddler by a mile, for many members of the public, he (and Phil Cunningham!) is still probably the difference between them knowing any Scottish fiddler and none at all.

Aly Bain’s 70th birthday is on 15 May 2016, in the middle of another long and meandering tour of the UK with Phil Cunningham. We wish Aly a very Happy Birthday and we wish the two of them all the best. We’re all looking forward to many more years of musical wizardry and laughter.

The amazing thing with Aly is that, even after so many years and despite the explosion of fiddle talent among the younger generations that have followed him, if you take any of the techniques discussed above (slow air playing, spiccato bowing, left-hand pizzicato) you could still argue convincingly that Aly is the best exponent.

Perhaps a good way to close is with an excerpt from a poem (‘Shetland Reel’) written by Norman MacCaig for Aly’s 40th birthday:

The fiddle bow slides and hops and dances
At a speed that should sound hectic but doesn’t …
The result? – a tune: a witty celebration
Of nimbleness and joy, fit to be played
In a tenement room, in a hall, in the lee
Of a Shetland peat stack where the Aurora
Remembers its other name, the Merry Dancers.