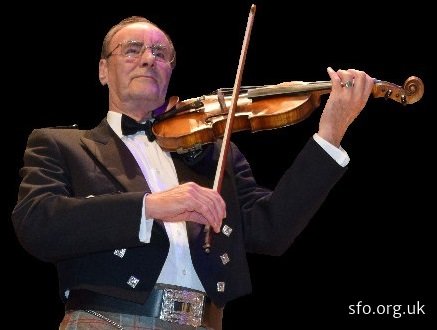 Born in Alloa on 3rd September 1939, Bill is the eldest of three children.

He comes from a musical family, with his father being an accomplished violinist.

His brother plays the guitar, his sister the piano, but it was to the violin that Bill was directed as a youngster, under the tutelage of his father, who was, at the time, the conductor of Stirling Strathspey & Reel Society.

This early association with Scottish music fuelled a passion within Bill which was to become a major influence in his life and was to take him all over the world.

His talent really developed in the Army, where he played on a regular basis and was allowed to mature into a fine violinist, attending classes in London and earning plaudits for his arranging talents, as well as his playing ability.

He left after a six year spell and found himself looking at a return to Scotland, with his wife Teresa and their young family.

He decided against orchestral playing as he wished to be at home, and, quite by chance, found himself being offered the position of violin teacher by Clackmannan Council.

He accepted the position and for the next thirty years  – until his retirement – he was the inspiration for many youngsters and became a highly respected player, adjudicator, composer and publisher, with several successful books on Scottish fiddle playing to his name.

As a teenager, he was very active in sport and became an international standard tennis player.

He is an accomplished painter, with many fine works to his credit.

He also developed an interest in restoring old cars, which he has passed on to his son Steven, who himself is now an award winning enthusiast.

Altogether, for Teresa and the kids, life could never be called dull!

The path to the SFO

During all this time, Bill was playing, writing and becoming more and more involved in the Scottish music scene.

Following the loss of his father, he took on the role of musical director and conductor of Stirling Strathspey & Reel Society, which he has held right up to the present time.

It was probably inevitable that he would catch John Mason’s eye sooner or later. John had founded the Scottish Fiddle Orchestra in 1980, which was enjoying great success and had a requirement for a new leader.

Bill took on the challenge, with his usual enthusiasm, and has been leader since 1983.

In that time, he has become a much-loved and highly respected figure within the orchestra and it was with pride that Bill accepted the role of President in 2011.

The SFO is proud to acknowledge Bill’s contribution and this little feature allows us an opportunity to say a public ’thank you’ for the time and enthusiasm he has given to his various roles.

[This article first appeared in the programme for the SFO’s Edinburgh Concert on 30 December 2014].