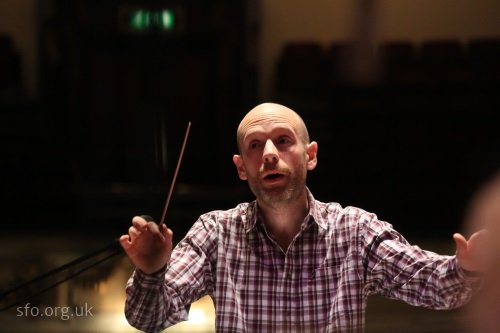 This article first appeared in the SFO programme for the Usher Hall concert of 13 June 2015:

Originally from Ayr, Blair’s first proper introduction to music began at the age of six when he took lessons on the recorder, before beginning to learn the cello when he was 8 under the instruction of John Leitch. Blair performed annually at the Ayrshire Music Festival, playing cello and recorder and participating in all manner of ensembles. One of the highlights was performing in Holmston Primary School’s cello quartet – a quartet that performed together through most of their secondary schooling at Belmont Academy in Ayr.

In 1987, Blair was introduced to traditional fiddle music when he went to his first rehearsal with the (then) Ayrshire Junior Fiddle Orchestra formed by one of the Scottish Fiddle Orchestra’s founding members, Wallace Galbraith.

Two years later Blair embarked on his first international tour with the AJFO when they toured France, Switzerland, Belgium and Holland. This was to be the first of many experiences abroad in a musical sense and opened his eyes to how much he could achieve playing his cello.

In 1995, Blair auditioned for The Scottish Fiddle Orchestra in the Green Room of The Usher Hall. He remembers it like it was yesterday: half way through the audition in front of orchestra leader Bill, and section leader Irene, in walked John Mason himself who calmly sat down alongside them – nothing like being put under further pressure! Despite being incredibly nervous, Blair passed his audition and was invited to join the orchestra.

Since then, Blair has risen from the back desk of the cellos to being bass player in the “SFO Folk Symphony”, a part time member of the percussion section, a member of the orchestra’s male voice choir (“The Glee Club”), and – the pinnacle of anyone’s career in music – the Chicken in the “Hen’s Mairch Ower The Midden”!

Life outside the SFO

Although highly influenced by music and particularly Scottish fiddle music, it was in science where Blair found his calling. After leaving school he studied for a degree in Genetics (part of which involved research into the brains of fruit flies!), followed by a postgraduate degree in Information Technology.

After his studies Blair took a year out to work in Australia and Canada; on his return to Scottish shores in 2001 he was invited to take up the Assistant Musical Director role of the Ayrshire Fiddle Orchestra. In 2002 he took a further break of 6 months to backpack round South East Asia, visiting China, Vietnam, Cambodia, Thailand, Burma and Malaysia.

When he returned this time he trained to become a teacher, and was awarded the University’s Court Medal. He currently teaches biology and science to secondary school pupils and advises them on Higher Education and university entrance requirements as well as being a Head of Year.

A huge part of Blair’s musical journey has been the opportunities he has had to tour internationally, starting with the tour with AJFO in ‘89. Through the biennial tours of the Ayrshire Fiddle Orchestra and tours with the SFO, he has traveled all over mainland Europe and Scandinavia, New Zealand, Australia, all over North America and more recently China, playing to more than 10,000 people on each of two separate tours there.

In 1995 with the AFO Blair performed on the lawn of The White House. Although a prestigious venue, for Americans it paled into insignificance when, on that same tour, he performed the American National Anthem on the field of Shea Stadium, the home of the New York Mets baseball team at that time.

Having had experience of conducting the AFO, in 2008 he was delighted to be asked to take up the baton of the SFO alongside John Mason MBE. When John Mason sadly passed away in 2011 Blair became Conductor and Musical Director of the orchestra; a role he thoroughly enjoys and feels honoured to have.

In December 2012 he was tasked with leading the successful tour by the SFO to China, which led to him being interviewed on Radio Scotland about his musical life and experiences.

In addition to teaching and his work with the SFO, Blair also directs contemporary fiddle group “Innovation” alongside acclaimed fiddler (and former SFO member / soloist), Alistair McCulloch. Innovation is a group of 25 players aged between 18 and 25 who perform high-octane fiddle music from around the world and have won rave reviews for their performances. Rod Adams of The Herald wrote of their performance at 2015’s Celtic Connections that it had “imaginative arrangements, sonic variation and momentous vigour.”

However, all Blair’s musical and teaching commitments are nothing when compared to the biggest and most rewarding challenges in life: looking after his two sons, 4-year-old Findlay and Fraser who is 2, with his wife Lesley. Both boys have already wielded the baton in front of the orchestra and have tiny violins, though they are more interested in Peppa Pig than Scott Skinner…

Blair has other musical plans in the pipeline to add to his portfolio of projects, but will always consider The Scottish Fiddle Orchestra as one of his most important and enjoyable.

All images via Iain Stewart Photography