The Scottish Fiddle Orchestra’s dynamic Conductor, Blair Parham, is renowned for his swinging kilt during concerts.

The SFO is proud that Blair is also a World Peace Tartan Ambassador.

It’s a tartan he often wears when on stage with the SFO.

We asked Blair to explain how he came to be involved in the project and what it hopes to achieve. This is what he told us:

A little over a year ago I was contacted by Victor Spence, Founder of the World Peace Tartan Initiative asking if we could perhaps meet to discuss the initiative and how I could become part of it.

I met with Victor and listened to the history of the initiative and its aims and objectives, before giving him the history of the SFO and my involvement with it. Victor had clearly done his homework as he knew most of what I had to say! The culmination of the meeting was when Victor asked if I would become a World Peace Tartan Ambassador – something I was honoured to be asked to do.

The World Peace Tartan Initiative was created in 2011 as a message of peace.

It also helps to generate funds to aid charitable work through the licensing of its brand, design and products. As it grows, the World Peace Tartan Foundation invests in education initiatives intended to build a culture of peace and address child poverty.

Although the Tartan itself was created in 2011, Victor told me the story began much earlier – in 1998 – when he dreamt of meeting the Dalai Lama. This dream stuck with Victor, and he made it his mission to meet the Tibetan Monk and bring him to Scotland. Victor met the Dalai Lama in South Africa in the late 90s where the Dalai Lama presented Victor with a white silk Tibetan scarf called a khata. At the same time, Victor presented the Dalai Lama with a Tartan Scarf.

Victor met with the Lama in 2003, again presenting him a tartan scarf, although this time he wrapped it around his neck himself. It was at this moment, Victor realised that the presenting of a scarf, in itself, is symbolic.

Victor was successful in bringing the Dalai Lama to Scotland in 2004.

He has returned several times since.

In 2010, Victor decided a specific tartan should be used when presenting the scarves to religious leaders and Nobel Prize Laureates as he had been doing since meeting the Dalai Lama initially. In 2011, Victor created the design as we know it today.

The tartan was launched on June 22, 2012 when the first ever World Peace Tartan scarf was presented to the Dalai Lama during a visit to Edinburgh.

Since then, other global leaders and Nobel Peace Prize winners including Pope Francis I, Archbishop Emeritus Desmond Tutu and Arun Ghandi, grandson of Mahatma Ghandi, and have been presented with a World Peace Tartan scarf.

I was very humbled to be asked to become an Ambassador to represent the initiative. 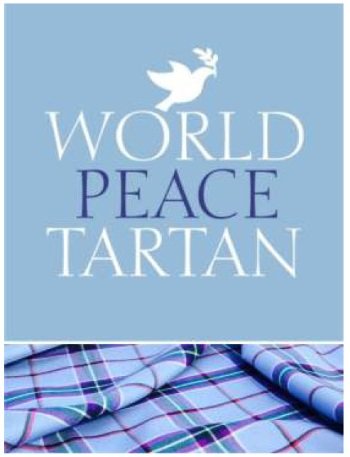 I was kindly gifted a World Peace Tartan Kilt by the initiative in April 2017 and wear it proudly at SFO concerts.

The striking light blue in the design is representative of the presence, hope and potential of the United Nations.

Scotland – at the heart of this enterprise – is represented through the purple and green of the thistle, its national flower.

The red and black running through the pattern represents the realities of war and violence, with the white providing a counterbalance in being symbolic of peace and light.

[NOTE: This article first appeared in the SFO’s Newsletter for June 2018. You can sign up to become a ‘Friend’ of the SFO and receive the Newsletter free, using the sign-up form on this page – and just about every page – of the website].