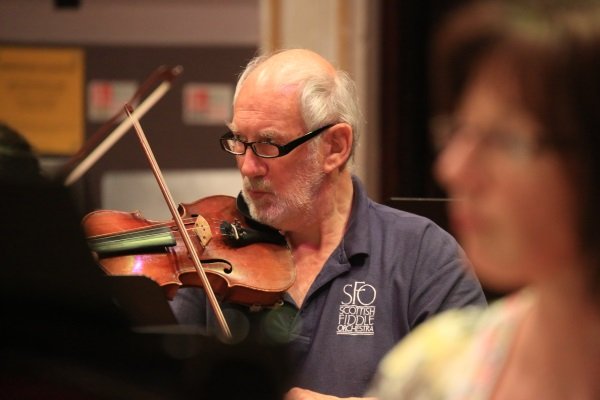 As set out in the SFO Newsletter for August 2017, we’re very sad to report that, on 4th August 2017, Campbell lost his battle with what he had characteristically described as “a wee touch of cancer”, something with which he had several run-ins over many years.

Campbell never seemed to let anything get him down. He always had a positive outlook, which he communicated to everyone with whom he came in contact. He always had words of reassurance or encouragement.

In the context of the SFO, Campbell was a larger-than-life character.

On stage, he was literally “larger” because, as the orchestra’s only left-handed fiddler, he immediately stood out to audiences.

He loved sport and played tennis, squash and rugby to a high standard. He was a naturally-gifted multi-instrumentalist: apart from the fiddle, he could play piano, organ, bagpipes and accordion.

He was also a crucial part of the SFO’s board of management, as Marketing Director – a hands-on job which he relished and excelled in over many years.

On 15th August 2017, a full house at Almondbank St Serf’s Parish Church heard eulogies from the minister, from family and – on behalf of the musical fraternity – a tribute from the SFO’s Jim Brodlie on Campbell’s musical life. The music included an introductory recital – and hymn accompaniment – from members of the SFO and Dunkeld & District Strathspey & Reel Society; also, a solo performance of John Mason’s Slow Air “The Flower of Portencross” by Elisabeth McLay. Ross Ainslie and Ali Hutton played Gordon Duncan’s moving “Sleeping Tune” and then delivered a masterclass in harmony bagpiping outside the church as everyone was leaving, which brought the traffic to a standstill.

Campbell leaves so many gaps to fill, even just within the SFO, that it’s hard to know where to start.

Still, we all feel privileged and inspired to have known such a generous and talented man. As Campbell’s brother, Duncan, said in the church, “Campbell would not have wanted us to be sad – AND SO WE WON’T! Cheers, Campbell”.

We are grateful to Jim Brodlie for allowing us to reproduce the text of his tribute in full, below.

When Aileen asked me to say a few words today about my friend Campbell, I felt both honoured and – at the same time  – apprehensive because, despite the inevitable and over-riding emotion of sadness today, the man we all knew, loved, cared for, admired and respected stirred within all of us emotions of pleasure and happiness.

I have only known Campbell for the past ten years or so, but in that time he has become a very close friend.

Why? Well, it was through music – as I suspect was the case with most of you here today.

I am not competent – nor would I wish to be – in describing how good Campbell was as a musician. What I can say, with no fear of contradiction, is that his enthusiasm, his dynamism and his determination to be the best that he could be in the musical field, was beyond belief.

Campbell could cope with a variety of musical instruments, be it a fiddle, all-be-it holding it in the “wrong” hand, a violin, a piano, an organ, bagpipes etc.

He loved – and had an encyclopaedic knowledge of – Scottish music, and he possessed a true self-belief and confidence in coping with any music presented to him from Mozart, Bach, through Bill Cook and Pete Clark to one of his great favourites, Niel Gow.

I remember years ago when Campbell was persuaded to audition for the SFO.

Although he had played for decades before, and was a very competent fiddler, he had always believed that a left-handed fiddler would not not sit too easily in the regimented ranks of the SFO.

He nervously sat his audition then sat with the fiddlers during the afternoon rehearsal.

At night, before the Concert, he asked Bill Cook where he should sit, at this stage not knowing whether he had passed his audition or not.

Campbell was directed not to either of the 1st or 2nd fiddle sections but to the electric keyboard, where he played the whole concert and more, with no music!

Of course, he had passed his audition, but the powers-that-be had enough confidence in his musical ability to ask Campbell to play a different instrument on that occasion.

Had he told Bill Cook that he could play the keyboard? We don’t know, but Campbell wasn’t backward in coming forward.

Campbell loved all genres of music.

He played regularly with the Tayside Symphony Orchestra, playing classical and semi-classical music including a piece called ‘Espana’ by Chabrier, where the string players had the rare opportunity of playing with the wood of their bows. Campbell would have enjoyed this experience and he must have been a sight to behold.

His true love was Scottish music and, when the position of conductor of the Dunkeld Reel and Strathspey Society became vacant in 2010, Campbell applied, and got the job.

He held that position very successfully until his illness prevented further participation, taking the Society to an extremely high position in the standard of orchestral Scottish music.

He conducted an orchestra as he lived his life…

…with verve, enthusiasm, confidence and a strong belief that he could get his colleagues, his players and his audience to enjoy the experience and believe it to be both wonderful and fantastic.

He fiddled with a long bow; he wished the piano had an extra octave on each end, so that he could play even more notes; and he conducted, leaning forward towards his orchestra, with both arms outstretched and every finger moving in a different direction. Every player was under his personal and direct control. And, after every piece finished, his first words always were… “Well done, that was marvellous “.

How many of you remember one of the very successful Dunkeld rallies a few years ago in the Pitlochry Theatre?

The stage was choc-a-block with invited players from all over Scotland. The theatre was packed. 7.30 struck and the curtain drew back.

The conductor, Campbell, walked on to the front of the stage but, after three impressive strides, he tripped and fell to the stage – legs in the air, kilt everywhere-but-where-it-should-have-been, and the baton landing in the second row of the stalls.

The audience and the orchestra gasped with horror and then collapsed with laughter as the bold Campbell rose, composed himself, smoothed down his kilt, bowed to the audience and called the orchestra to attention for the first set of the evening. He had absolutely everyone in the palm of his hand.

Campbell once asked me to play the first 16 bars as an intro for the Kerrera Polka at one of these rallies.

I like playing polkas as you would dance to them.

Campbell wanted to it to be at a much slower pace.

Well, despite – or maybe because of – his extraordinary, enthusiastic conducting style it came out of my accordion like a demented Irish Jig. And it was a few years before I was allowed another solo intro at Dunkeld. The words Kerrara Polka have since then always caused both of us to dissolve into laughter.

A few years ago Campbell and Aileen joined Fred Prise and myself at our usual Hogmanay engagement on Loch Lomondside.

The fun and enjoyment we had, both playing and in each other’s company, cemented our friendship even further. Campbell was in his element. From the “Wee Cock Sparra” to fast and furious piano solos and accompaniments. He did not believe that the piano should ever only play a rhythm role. Every note on the instrument could – and probably should – be played as often as possible. What fun we had trying to calm him down at the Eightsome Reels. That quartet formed the band at that engagement for quite a few years.

It would be wrong of me to only mention the playing side of music.

Campbell, throughout his life, had had quite a bit of administration experience.

As a consequence, he was asked to join the SFO Board – in charge of PR and marketing.

Nothing could have suited him better.

Campbell’s ability to communicate with all types of people was legendary. Campbell was a friend to everyone, and everyone was a friend of Campbell.

Business deals became co-operation between Christian names. The combination of Campbell and IT wizard Douglas Smith proved exceptional and I know that I and the other administrators in the SFO will greatly miss their combined efforts.

When the Glenfiddich Fiddle competition, held at Blair Castle, closed because of a lack in sponsorship, the news reached Campbell.

This Competition attracted some of the world’s greatest fiddle exponents and it was considered a real tragedy when it closed.

Campbell asked, persuaded, and cajoled some of his close friends to consider taking over the Competition and restoring it to its former glory.

After a great deal of effort, a lot of it being done by Campbell, the Niel Gow Scottish Fiddling Awards were created and took place in March in Blair Castle this year. This has been a great achievement and fiddlers worldwide are indebted to Campbell and his colleagues for their efforts.

Music can be a gateway to so many other paths in life.

It has been for me – to meet Campbell, Aileen and scores – if not hundreds – of others, both inside and outside the musical world.

Campbell was loved by both men and women alike – and the reason? He cared for each individual and was always interested in his or her achievements, great or small.

His enthusiasm for life, for living, for music and for all his friends knew no bounds, and we are all the poorer at losing him so cruelly and so early.

All is not sadness, however. Campbell’s marriage to Aileen in March was, to him, the culmination and fulfilment of a loving 17 years. And, to all their friends, it was absolutely perfect to see Campbell so very happy on that day.

Now we have to say goodbye to Campbell, but we do have all those wonderful memories.

The great fun we had with him.

Playing with him, both far afield in China and in Australia or closer to home at venues throughout the UK. We remember the gigs in Concert Halls, in ceilidhs, in wee dances and in sessions in hotel bedrooms. Music and fun were in every fibre of his being, and these memories will live with us for ever.

And to Campbell, I say thanks for being such a good pal, to me and to all of us. We are so saddened by your passing, but you have left an indelible and an unforgettable mark on all of us. We wish you ‘God Bless and God Speed’ and I know that the Choir of Angels is waiting for you to tap your baton now and call them to attention to begin their first rehearsal of the Kerrera Polka.

Thanks Campbell and Thanks Aileen.