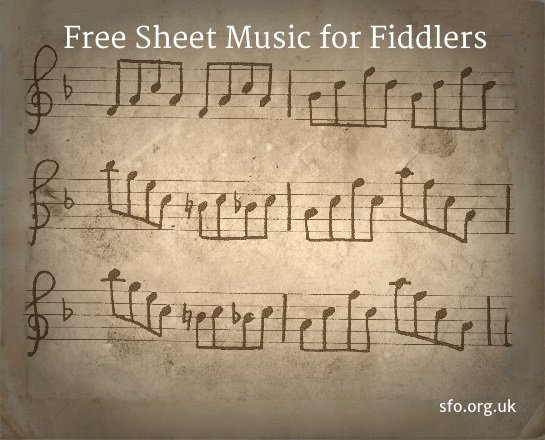 Via our Facebook page, a piper based in Santiago, Chile, recently requested the sheet music for the Eightsome Reel as played by the SFO.

Using the fantastic resource that is The Session website – even though it’s meant primarily for Irish, not Scottish, tunes – we were able t0 give him a good idea of the melody lines to Mrs McLeod of Raasay, The Fairy Dance, The De’il Amang the Tailors (2nd setting), Soldier’s Joy, The Mason’s Apron (7th setting), Staten Island, and Kate Dalrymple.

This all prompted thoughts about where else on the internet you can obtain free sheet music for fiddlers and the following few locations sprang to mind.

There are bound to be many others internationally but these have clear links to Scottish Fiddle Music.

Dr Tom Anderson’s 1979 tunebook with Pam Swing is out of print but there is a free download of the whole book HERE (note that download of the pdf version starts automatically if you click the link).

This is a lovely book, which starts with tunes at beginner level (fingerings marked) and has text in Shetland dialect.  It contains a significant proportion of the standard traditional Shetland tune repertoire, together with some of Tom’s own compositions and one or two by (a very young) Steven Spence.

If you learn all the tunes in this book, you won’t be caught short at a Shetland music session.

Ian Hardie was not from Shetland but his tunes live on – especially, it seems, among Shetland fiddlers – after his premature death in 2012.

He grew up in Edinburgh, went to Edinburgh University, then lived and worked as a solicitor / folk musician (a “fiddling solicitor”, in his words) first in the Scottish Borders and latterly in Nairn, near Inverness.

There is a lot of interesting information about him in the Obituaries preserved on the Edinburgh University website.

Ian’s tunes are available for free download from his website and they deserve to be more widely known even than they are now.

He has some cracking melodies in each of the different formats (reels, jigs, marches, waltzes, slow airs, hornpipes etc.).

Nigel Gatherer’s “Tune of the Week”

Nigel Gatherer is a professional musician, based in Crieff, Perthshire, who has been involved in performance, teaching, collecting and publishing of Scottish traditional music for over thirty years.

The “Tune of the Week” feature on his website contains a treasure trove of music from Scotland and beyond – covering all the major world fiddle traditions.

It’s all beautifully notated and presented.

One example of a jewel in this box is the music Nigel has transcribed for “Reel Eugene”, which features in the YouTube video for Mission 5 of the Commando Trad series.

If you know of any good sources of fiddle sheet music and you would be willing to share, please let us know – perhaps in the Comments here or over on Facebook.

We hope this post might help you to find some new tunes to learn and enjoy – whether that’s because the links are new to you or because you’re reminded to revisit them.