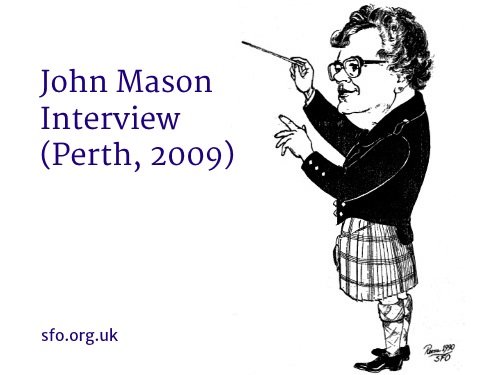 John Mason was the founder of the Scottish Fiddle Orchestra and its Musical Director until his death, at the age of 71, in January 2011.

There’s a brief but revealing interview with him on YouTube, from which you can get a good idea of his drive and enthusiasm for Scottish Traditional Music, in general, and the SFO, in particular.

His great sense of humour and fun also come across well.

Master of the ship

Describing the SFO as performing an eclectic set of traditional and original pieces and their Musical Director as standing on the prow like the proud captain, “Scotland on TV” (STV) did their John Mason interview just before the SFO concert at Perth on 05 December 2009.

John was happy with the auditorium, describing the theatre as “great”, and having “every conceivable comfort”. In his view, the acoustics were “absorbent” – lacking echo or reverb – which meant you had to be careful in order to get a good quality sound across to the audience.

Confirming that the SFO had been together since 1980, he described it as “a great big family team”.

This meant that, if anyone, for example, was not well or had suffered a bereavement, the others would club together to comfort them as much as possible. And, of course, he explained, the SFO members have many happy times and great fun together.

Referring to families which have had more than one generation in the Orchestra, he said: “Here we’ve seen “father and son” – maybe not the grandfather bit yet, but that will come.”

The Orchestra for that concert numbered about 90 and John confirmed that a full turnout would be between 110 and 115.

To him, traditional music could be “very exciting”, as well as ”sad”, “doleful” or “joyful”, whether played fast or slow.

He said his impression was that people tended to associate faster tunes or “bagpipey” tunes with Scottish traditional music, but there was a huge tradition of fiddle music running in parallel with bagpipe music. He felt that, all too often, the fiddle music aspect was “forgotten”.

Responding to a comment that he was “flamboyant performer” (and would probably need time to psyche himself up before the concert), John jokingly agreed that he would take 5 minutes to “consult himself in a slow prayer”.

John’s thoughts on the SFO

John was not well enough to attend all SFO concerts as his health deteriorated during 2010. However, he continued to compose and arrange music for the Orchestra and set the concert programmes.

Writing to Orchestra members before the Perth Concert in December 2010, he said: “It has always been difficult to determine the exact niche into which the SFO slots in the broad context of traditional music. We seem to be a bit of everything to everyone. That I feel suits us well so long as we do it well.”

The YouTube video of the interview – here’s that link again – runs to six and a half minutes and contains about as much music as speech, featuring excerpts from a few pieces by the Orchestra.