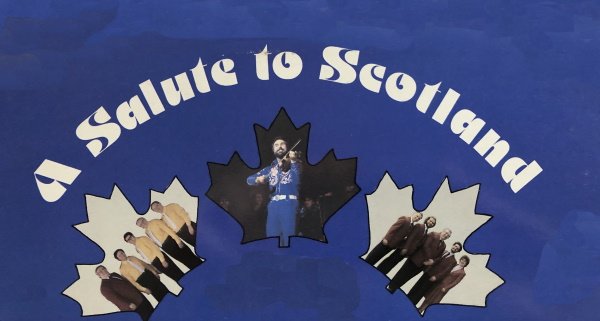 The SFO is set to tour the north eastern seaboard of the USA and Canada in March and April 2020.

“Cape Breton fiddling is a regional violin style which falls within the Celtic music idiom. Cape Breton Island’s fiddle music was brought to North America by Scottish immigrants during the Highland Clearances. These Scottish immigrants were primarily from Gaelic-speaking regions in the Scottish Highlands and the Outer Hebrides. Although fiddling has changed considerably since this time in Scotland, it is widely held that the tradition of Scottish fiddle music has been better preserved in Cape Breton.”

This article is a personal tribute to the fiddle music of Cape Breton, Nova Scotia, via a set of tunes played by the legendary group of fiddlers, the Cape Breton Symphony Fiddle.

The set of tunes features compositions by giants of both the Scottish and Cape Breton fiddle traditions.

One of the composers is John Mason, the leading light in the foundation and formation of the SFO in 1980.

In April 1984, I was on a week’s work experience in Elgin, Moray. I was 16 years old and in 5th year at secondary school in Edinburgh. My Mum’s cousin’s husband was a partner in a firm of solicitors (attorneys) in Elgin.

Out of the blue, I found out I had a ticket to go with Margaret (my Mum’s cousin) to see The Cape Breton Symphony Fiddle (CBS), The Scottish Accent Band, and Special Guest Star, Graham Townsend (GT) (The undefeated North American Fiddle Champion).

I had never heard of any of these people or groups before.

Despite that, it was to prove to a life-changing experience from a fiddle music perspective.

I was so fired up by the music they played that I managed to get tickets with the rest of my family to see them later on the same Scottish tour, at Brunton Hall in Musselburgh, near Edinburgh.

The overall leader and master of ceremonies was Bobby Brown – on piano and accordion – the arranger of all the sets of music played by the various performers.

Bobby was born in Dennyloanhead, near Falkirk, in 1941. He emigrated to Canada in 1957. By the 1980s, when I saw him several times in concert in Scotland with CBS and/or GT, his playing was fabulous but his jokes seemed a bit “Dad”. I remember him introducing GT in the late 80s as having pale, sallow skin underneath his bushy beard. Apparently, GT had been out all night with a gorgeous redhead: no hair, just a big red head.

Moving on to the Cape Breton Symphony Fiddle…

In 1984, CBS consisted of the following players:

Add to that their dress code of yellow shirts and white ties, and I was prepared to be underwhelmed.

In fact these guys played a set that was mostly reels and jigs, all at breakneck speed and mostly in the more difficult “flat” keys. Cape Breton Hornpipes were not in the dotted “Captain Pugwash” rhythm I was expecting – they were played like reels too.

Looking back on all of this from age 52 (“old”), it stays with me as an inspiration that you can still aspire to play difficult and fast tunes whatever age you are.

The album Bobby Brown and his various associates recorded for the 1984 tour of Scotland was called “A Salute to Scotland” and released by Ross Records of 29 Main Street, Turriff, Aberdeenshire, Scotland.

Among the instrumental numbers, it’s a tough call for me to find a favourite but the most significant set for SFO purposes would be Side 2, Track 1.

The sleeve notes have that as – 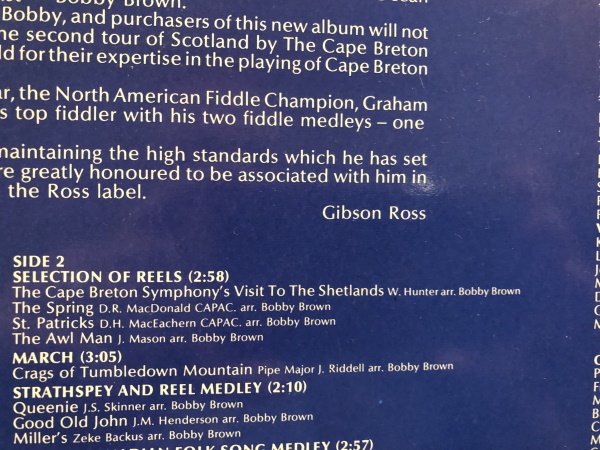 The first and last tunes have Scottish composers and the middle tunes are by Cape Breton composers.

I was a member of the SFO in 1984 but it never occurred to me at that time that “J. Mason” could be the SFO’s own “John Mason”. I assumed “Awl” meant “Old” in some form of North American accent.

“The Cape Breton Visit to Shetland” has become one of Willie Hunter Junior’s best-loved tunes among a list of compositions that has many highlights. The 1998 version of his tune book notes that “Such was Willie’s admiration for the Cape Breton fiddlers that he felt inspired to compose this reel, which has become a firm favourite played by both Scottish and Folk bands”. It seems to have enough musical ideas in it to have formed 3 or 4 great reels. This is the earliest recording of the tune I know of – which would ‘fit’ given that it was composed as a tribute to CBS.

I only found out the story behind The Awl Man about 20 years ago.

The tune came up in a conversation with Willie Dunlop (of Kilmarnock, not Willie Dunlop original leader of the SFO) of the SFO. (Willie features in Reesa McGinn’s drawing, discussed in the article here).

At that time, Willie was one of the senior members of the SFO, if not the oldest. He was explaining how John Mason had composed a March, Strathspey and Reel for him when he retired from the leather tanning trade around 1980.

He said he would send me a copy of the music, which he did.

When I got the music, I recognised the title of the reel – The Awl Man – and only then worked out that it was “awl” as in “a small pointed tool used for piercing holes, especially in leather” (and probably a pun on “old” too).

No one else has recorded tunes two to four, as far as I’m aware – which may be a reflection of the difficulty of the second and third tunes, especially.

This set could be regarded as featuring John Mason’s salute to Cape Breton and Nova Scotia, a place the SFO is very excited to be visiting in April 2020 as part of its 40th Anniversary Tour.

Straight from the vinyl, crackles and all, I hope you’ll agree these are great tunes: