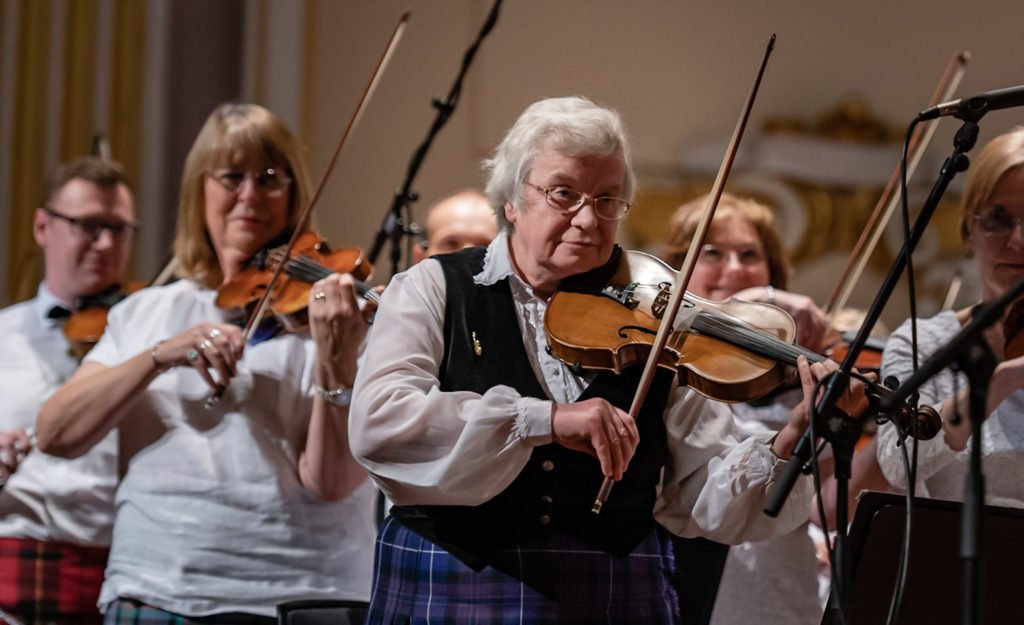 Yla Steven was born in Edinburgh – her Christian name is simply the old spelling of Glen Isla in Perthshire where she had a home in early years. She began learning the violin in Edinburgh at the age of seven, continued her studies in Blairgowrie, Perthshire and later graduated from the Royal Scottish Academy of Music and Drama.

A strong interest in Scottish traditional fiddle music developed at an early age and she entertained at many events during her teenage years. In Blairgowrie she was taught by Harry C. Ogilvie whose father had taught Ian Powrie of the White Heather Club.

…Competitions and the masters…

In the early 1970’s Yla began competing at all the major Fiddle Festivals in Scotland winning Championship Awards at Kirriemuir, Banchory, and Aberdeen. In 1976 she was the first ever winner of the Daily Record’s Golden Fiddle Award in Glasgow. En route to these successes she had mentoring from Sandy Milne of Banchory and many other great fiddlers like Hector McAndrew and Tom Anderson. Yla’s main area of expertise now, is the playing of slow airs – this has won her many accolades.

In 1977 Yla played as part of “An Edinburgh Fancy” in the King’s Theatre, Edinburgh at a Silver Jubilee Concert for the Queen and Prince Philip. There have been other “Royal” performances for Princess Ann, and Prince Philip. Yla has also played for violin greats such as Yehudi Menuhin, Max Rostal and Yfrah Neamen.

For almost forty years she taught violin, viola and cello for the City of Edinburgh Council. Here she founded the Lothian Schools Strathspey and Reel Society and passed on her skills to countless youngsters for more than thirty years. This group quickly became one of the best Strathspey & Reel Societies in Scotland winning the orchestra competition at the Angus Society’s Fiddle Festival eight times and playing all over the country from Aberdeen International Festival to Earl’s Court in London and from Dundee to Prestwick Airport. They toured to Germany, Argentina and to Canada and the United States.

Some of the former pupils joined her in a group known as the Festival City Players. This group enjoyed success at the Edinburgh Festival in a production of “An Edinburgh Edition” in 1978, marking the bicentenary of the Edinburgh Edition of Robert Burns poems. They also played for several years for the Royal Scottish Country Dance Society’s demonstration team. This Group toured in Holland and The Soviet Union.

Now retired, Yla lives in Blackford, Perthshire. She is Musical Director of the Edinburgh Highland Reel and Strathspey Society which has recently benefited from an influx of young blood – Yla’s former pupils from the Lothian Schools Strathspey and Reel Society. The Edinburgh Society has now developed a Junior Section to replace the LSSRS. The Edinburgh Society has also won the orchestra competition at the Angus Society’s Fiddle Festival six times.

Yla’s expertise as a fiddle tutor and an adjudicator at fiddle festivals, is constantly in demand.

…a founder member of the SFO…

In 1980 Yla was a founder member of the Scottish Fiddle Orchestra and was delighted when John Mason invited her to become its principal soloist. With the SFO Yla has had the opportunity to perform all over Britain from Lerwick, Shetland to the Albert Hall, London, and has toured with them across Canada (three times), Ireland and China.

Yla has performed in most of the great concert halls throughout Britain. She has also performed on radio and television and has numerous recordings to her credit.

She was awarded a British Empire Medal in the 2015 Queen’s Birthday Honours list for services to Scottish Music.