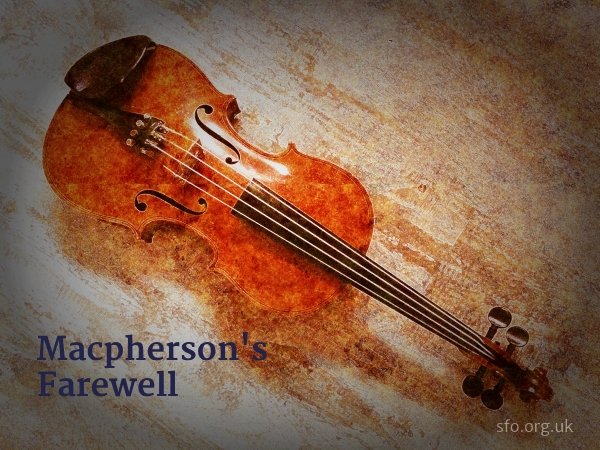 One of the highlights of this year’s SFO programme is “Macpherson’s Farewell” (also known as “Macpherson’s Rant”), which our conductor and musical director, Blair Parham, has arranged for orchestra and bagpipes.

This famous air was written by the infamous James Macpherson (1675 – 1700), freebooter (pirate) and fiddler, in the final hours before his death, by hanging, at the Market Cross of Banff on 16 November 1700. Macpherson reputedly played the melody at the scaffold, before offering his fiddle to anyone in the crowd who would take it.

No one dared to handle the fiddle for fear of being implicated, so he broke it over his knee and, according to some versions of the story, threw the remains to the crowd. (Other versions are available).

One of the giants of Scottish Fiddle Music, James Scott Skinner, wrote out the music for the tune and his handwritten notes on the manuscript record that it was ‘composed by the Hero (James Macpherson, ‘Freebooter’) in Banff Gaol, eve of his execution’.

His notes go on to mention how the authorities allegedly deprived Macpherson of a stay of execution because ‘during the delivery of his wild dirge round the Scaffold the reprieve was seen to approach’.

However, ‘the Banff clock was put up (put forward) 15 minutes to forestall it’.

What is left of the fiddle (quite a lot, it seems) can be viewed in the Macpherson Clan Museum in Newtonmore.

Words accompany the tune and tell Macpherson’s tale. Robert Burns is said to have ‘improved’ the lyrics and he renamed the song ‘Macpherson’s Farewell’. Some of the words appear in the heading to the tune, as set out in James Hunter’s book, ‘The Fiddle Music of Scotland’:

Farewell, ye dungeons dark and strong,
The wretch’s destinie!
Macpherson’s time will not be long
On yonder gallows-tree.