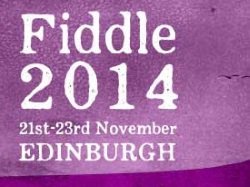 What must be about the 19th annual Scots Fiddle Festival takes place in Edinburgh over the weekend of 21st – 23rd November 2014.

Run by Scots Fiddle Festival Ltd, a registered charity, it is a feast of fiddle music, with concerts, workshops, ceilidhs, recitals, talks, an “open stage”, sessions and stalls.

The festival’s committee are all volunteers and they put their heart and soul into the organisation. They deserve congratulations for bringing together another international cast of performers for the evening concerts – this year, extended to three nights (adding Sunday).

The weekend itself could not function without the additional help of an army of committed volunteers.

Originally, the festival was held in the Assembly Rooms in George Street but for the last few years it has been between the Queen’s Hall (concerts and workshops) and the King’s Hall (stalls and sessions) in Clerk Street.

This year, for the first time, while the concerts are still in the Queen’s Hall, just about everything else is at Summerhall. This was formerly the Royal (Dick) School of Veterinary Studies and is now a creative hub for the arts.

It is close to the Queen’s Hall and the hope is that there will be a unified feel between the two venues.

This year, the Friday night concert features music and musicians from Orkney, billed as “The Fiddle Gathering”. Curated by Douglas Montgomery (The Chair, Saltfishforty), it promises to be a fun-filled evening of music and laughter.

On Saturday, the concert begins with the youngsters of this year’s Scots Fiddle Festival Outreach Project, followed by Bluegrass / Jazz fiddler, Casey Driessen, and rounded off with a set from John McCusker (fiddle) and Michael McGoldrick (flute, whistles and pipes).

Expect aural fireworks from Ross Couper and Tom Oakes as they open Sunday night’s concert. They are followed by Irish fiddle legend, Frankie Gavin, to round off the weekend in style.

There are several free events at Summerhall, including the daytime music sessions (for players and listeners) in the (former, we hope) “Dissection Room”.

On Saturday and Sunday at 1pm, SFO member Isla Ferguson hosts a free “Come and Try Fiddle” event for complete beginners. This is your chance to find out if the fiddle is for you.

How you can support the festival

As Scottish musical charities, the aims of the Scots Fiddle Festival and the Scottish Fiddle Orchestra are very similar – essentially, the education of the public in Scottish tradition and culture through music.

Tickets for the festival can be purchased from the Queen’s Hall Box Office – and remember that some of the events are free of charge. We hope to see you there.

If you can’t get along to the festival in person, one simple way you can support the good work it does in the community and future festivals is by purchasing “The Danish Hut”, the track recorded by the 2013 Scots Fiddle Festival Outreach Band, “13/8”. It’s available on iTunes. Featuring cracking tunes and a super arrangement, we recommend that you add it to your playlist.