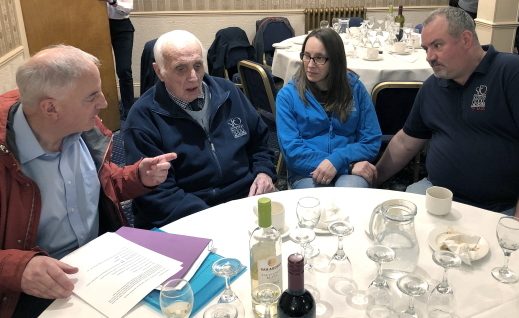 Who wants to follow in the footsteps of such renowned half-time pundits as Alan Hansen, Graeme Souness and Ron Manager?

Our own Catriona MacLean, Willie Kidd and Jamie Mason subjected themselves to interrogation by SFO Chairman, Bob ‘Lineker’ Diament, during half time at our Perth concert (22 February 2020), the whole of which was streamed live on YouTube.

Rising above periodic heckling from the PA system, these brave souls touched on subjects as diverse as

They packed a lot of information – some of it relevant – into 10 minutes and 43 seconds of chat.

We’re pleased to report that the SFO consolidated its 1-0 half-time lead (which, unfortunately, none of our pundits bothered to mention), winning 2-0 through a late header from youngster, Dennis Haggerty.

Bob: We’ve never done a half-time chat before, so you’ll have to bear with us. We haven’t got any great stars: Beyoncé wasn’t available and Madonna apparently was booked. But we have got three real stalwarts of the orchestra and, for people who follow the orchestra, I think you’ll know who our guests are tonight. First of all, we have Catriona Maclean…

Bob: Catriona plays in the First Violin section… We also have Willie Kidd…

Bob: Willie is in the Engineering Section – he plays the accordion. And we have the principal, leader and artistic director of the cymbal section, Mr Jamie Mason.

What do you think of the show so far?

Bob: So, Willie, what do you think of it so far?

Bob: Did you enjoy it?

Willie: I enjoyed it very, very much.

Bob: Jamie, how do you think it’s going?

Bob: What do you think of the audience, Catriona?

Bob: We always get a great reception in Perth. This year just the same as ever, if not a little bit better. My only problem was that I was struggling with Robert Lovie’s poetry.

Willie: There is no form of amplifier near us so that’s why we never smile or laugh – because we can’t hear what the compere is saying.

Catriona: Is that your excuse, Willie?

Bob: It is a conscious decision by the SFO management to make sure that the accordions are not amplified.

How did you become a member of the SFO?

Bob: I’m going to ask a few questions about your experiences of the orchestra because you are all long-term members. Most of you are founder members. I’m just a ‘new boy’: I only joined about 10 or 11 years ago. So, Catriona, how did you get into the Scottish Fiddle Orchestra?

Catriona: Well, I was playing with the Highland Strathspey and Reel Society in Inverness.

(PA System Announcement): Ladies and gentlemen, this is your 10-minute call. You have 10 minutes, thank you.

Bob: Madonna doesn’t have to put up with that.

Catriona: No, Madonna doesn’t get ‘10 minutes’ in Perth. I got a letter sent to the Society from John (Mason), asking if anyone would like to come and play in the SFO. I thought that sounded like a good thing to do. So I trundled along as a wee lassie. I was there from the very first concert, aged 15. Oops – just given away my age…

Bob: So, Willie, how did you get into the SFO?

Willie: I played with John’s original orchestra which was Ayr and Prestwick Strathspey and Reel Society. They formed the nucleus of the new orchestra.

Bob: And you were there from the start – ‘in with the bricks’?

Willie: We used our own singers. We hadn’t guest singers as we have nowadays. We used the singers from the Ayr and Prestwick orchestra. Aberdeen made us very, very welcome.

Catriona: Yes, they did.

Bob: Jamie – here’s a ‘loaded’ question: How did you get into the Scottish Fiddle Orchestra?

Jamie: Well, I think it was more down to babysitting duties… One night, because Andrew Cousar (former SFO and Ayr & Prestwick bass player) couldn’t make it to a concert of the Ayr and Prestwick society, I was told by my Dad to play. Dad said he would stick up one finger if it was in ‘G’, so I went BOM-bom BOM-bom…

Jamie: John M. Mason. I should have guessed – no nepotism allowed in the SFO… If he held up one finger, we were in ‘G’ and I could play D and G open strings. Two fingers and we were in ‘D’: BOM-bom BOM-bom. If he held up three fingers, we were in ‘A’ – and I should not play anything at all! I was given my brother’s bass and put straight onto the stage. Then, about four years later, I came to play with the SFO in Aberdeen. I’d been to some of the concerts previously. My Mother had brought me along – I would have to come as part of the family. I think my Dad saw it as a better opportunity to be able to mind the children without having to pay any fees (for babysitting). So I became a fully-fledged member of the orchestra from 1983.

What are you looking forward to most in the SFO’s 40th anniversary year?

Bob: So, looking forward: 2020 – this is a big year for the SFO. It’s our 40th anniversary. Willie, what are you looking forward to in the coming year?

Willie: Well, we’re playing a lot of new things which are not like the type of thing we played when I first joined the orchestra. I think it’s a good idea. We’ve branched out. We’ve got to move with the times. While the traditionalists would want us to play traditional music, we’ve got to branch
out and the young people have got to get their chance. The young people are coming forward with new ideas. Let’s go for it!

Bob: Good. Catriona, what is going to be the highlight for you this year?

Bob: What’s the date of the concert?

Catriona: Saturday, 13 June 2020. The tickets are already on sale from the Usher Hall box office in Edinburgh and online.

Jamie: Of course, there is our ‘usual’ concerts. We are playing in Aberdeen in May.

Willie: I thought it was in April.

Bob: No, we just told the accordions that it was in April. The rest of us are going to be there on 16th May.

Jamie: Tickets are available for the (Aberdeen) Music Hall on 16 May 2020.

Bob: I just got my ‘instructions’ opened and it is definitely 16th May.

Catriona: You sure about that, Bob? 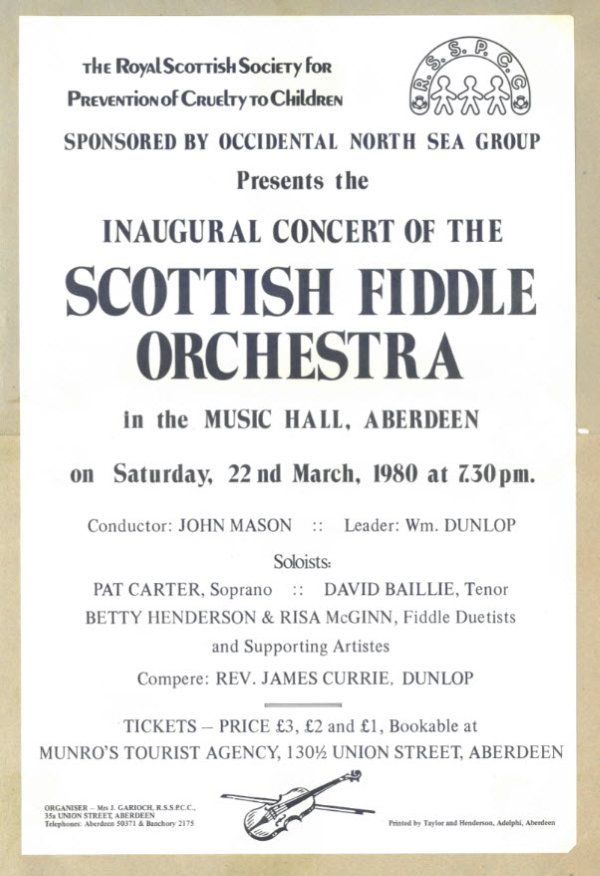 The poster for the Scottish Fiddle Orchestra’s first ever concert in 1980.

Jamie: But, before our Aberdeen concert, of course, we’re going on our tour to North America. We fly to Boston and we are starting with the first concert on 31 March 2020, after couple of days to get ourselves organised and rehearse and acclimatised – I think it’ll be a bit chilly. On the 31st, we are in Portsmouth (New Hampshire).

(PA System Announcement): Ladies and gentlemen, this is your ‘five-minute’ call. You have five minutes, thank you.

Jamie: After that, we go to Fredericton (New Brunswick). April 1st. (NOTE: This is not the correct date – see below).

Jamie: That is for real. We are really going to be in Fredericton. We are at the Franco Centre for the Arts in Lewiston (Maine) on 1st April. Fredericton Playhouse on April 2nd (which is the correct date). Confederation Hall in Charlottetown (Prince Edward Island) on April 3rd. The Riverview Arts Centre in New Brunswick on April 4th. The Rebecca Cohn Auditorium in Halifax (Nova Scotia) on Tartan Day – 6th April – and then in Montréal (Quebec) – in Le Gésu – on 8th April 2020. Tickets are available. If you’re listening to us from North America, book your coach parties and buy your tickets. Come and see us. We very much look forward to meeting you.

Bob: We don’t mind if you follow us from concert to concert.

Jamie: We will be doing a number of ‘pop-up’ concerts in different places here and there which are not on that list. Where we just ‘arrive’. We have been helped by ‘cultural exchanges’. Meeting pipe bands. I’m very much looking forward to the Mounties (Pipe Band).

Bob: (By way of explanation) ‘Cultural exchanges’ are not all ‘liquid’. There will be some genuine culture involved.

Catriona: I’m not keen to play a ‘pop-up’ concert in the rain, Bob.

Bob: That will be snow.

Bob: I apologise for not printing the concert list out in large-enough type that Jamie could actually read it. The orchestra really is looking forward to going to North America. We’re going to be joined by pipe bands at most of our concerts. That really is the highlight for me, meeting all the local groups, (including) local fiddle groups. 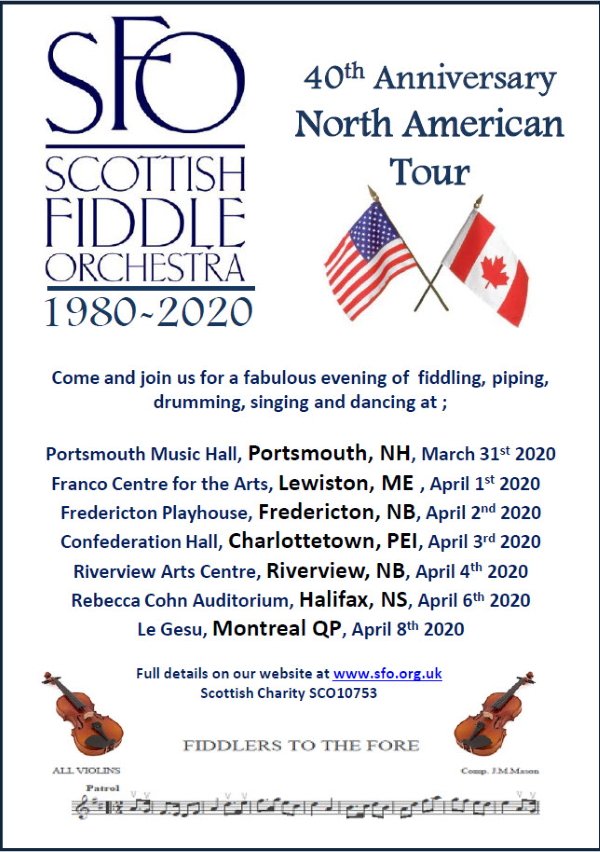 What do you like best about being a member of the SFO?

Bob: I’m afraid we’re running out of time, so there will only be time for one last question: ‘What do you enjoy most about being a member of the SFO?’ – Catriona?

Catriona: Well, for me, because I’ve been in the orchestra since I was 15, it’s like my extended family now. It’s great when you get new members coming in because the family just keeps on growing. We bumped into two former members this evening in the hall, coming in. It was just as welcome to see them as it is to see everyone who is in the orchestra currently.

Willie: I would say exactly the same. It’s the friendships. Anyone can sit down beside you and, when the music goes up, that’s it. You all enjoy it and you all participate. And that’s the main thing in the orchestra. This great feeling in the orchestra that you’re there to enjoy yourself.

Bob: I think we will have to wrap up now. Is there anyone you would like to say ‘hello’ to before we go off air?

Willie: I would like to say hello to Jennifer [Willie’s daughter] in New Zealand, if she is listening. Hello Jen!

Jamie: Everyone who knows me. My family at home and also people all over the place that I told late-on that this was happening.

Bob: So, Lady and Gentlemen, thank you very much for joining us.

Catriona: It’s been a pleasure.

Bob: So I should probably introduce myself… Too late!

Catriona: (That was) Bob Diament speaking…

Bob: Thank you very much.

Note that the original version of this article appeared in the SFO Newsletter for March 2020 (Number 83).