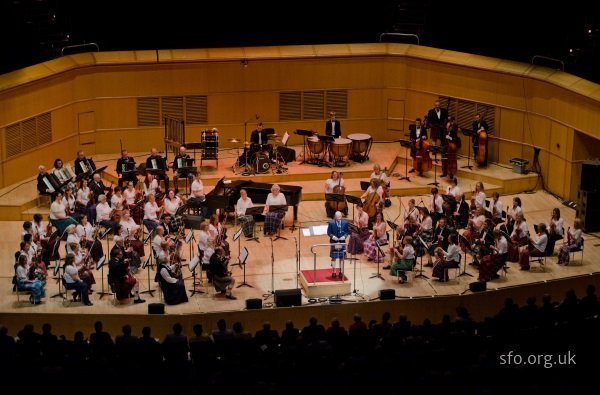 It is almost exactly 25 years ago that the SFO played its first concert in Northern Ireland.

That was the headline for the occasion as reported by the Belfast Telegraph on Saturday, 31 August 1991.

The piece went on: “The remarkable Scottish Fiddle Orchestra hit the right note with a packed audience in a very hot Ulster Hall last night.”

“The marvellous success of the event was perhaps summed up by someone who, quoting a local wag, said at one point – ‘Yis are stickin out’.”

“It was indeed a remarkable event by 100 or so musicians and artists, all brought under baton of the remarkable John Mason, conductor and musical director.”

“The musical artistry was there as the great ensemble moved through reels, jigs, strathspeys and hornpipes and, as expected, there were some Irishmen and women in the midst of the Scottish throng. Indeed, one of the many highlights was the playing of some music from Carolan by the very talented Garrykennedy Heritage Players from North Tipperary.”

We then find mention of another “Celtic alliance”.

At that time, Gerry, a founding member of the SFO (and official “SFO Legend”), was also our President. He featured in the programme as part of a fiddle / flute duet, playing ‘The Lark in the Clear Air’.

The newspaper reported that:

“Dr Gerry Crean appeared with his fiddle, but first he explained: ‘I think you ought to know that I’m a better doctor than a fiddler.’ Truth is, he can fiddle as well.”

The SFO had such a great time that night that the orchestra made a return visit to Belfast the following year.

After that concert, one local newspaper report described the SFO as, “in truth, one of the most versatile music machines around today, giving space to both young and old musicians in a whole lot of directions.”

“There was a stage full of talent around last night and that included Yla Steven, who paid tribute to Irish artistry with the haunting Carolan slow air ‘Blind Mary’. Magnificent, and nothing short of that.”

More recent visits to Northern Ireland have been less frequent but the orchestra has played in Londonderry, as well as Belfast, in the intervening years.

SFO members are very excited at the prospect of another Belfast Concert.

“There is so much in common between Scottish and Irish music.”

This will be another opportunity to explore and celebrate those links.

You will find that some things with the SFO have changed in 25 years and others less so. A night out with the SFO is still an unrivalled mix of music, song and dance – topped off with fun and laughter.

The flyer for the concert can be viewed (at the time of writing and in the lead up to the concert) on the Home Page of this website.

Tickets are already on sale.

They are available for booking via the Waterfront website or by phoning the box office on 02890 334455 .

Our charity partner for this concert is the Northern Ireland Cancer Fund for Children.

The Scottish Fiddle Orchestra returns to Northern Ireland all fired up for a great weekend and concert – and we hope we’ll see you there. 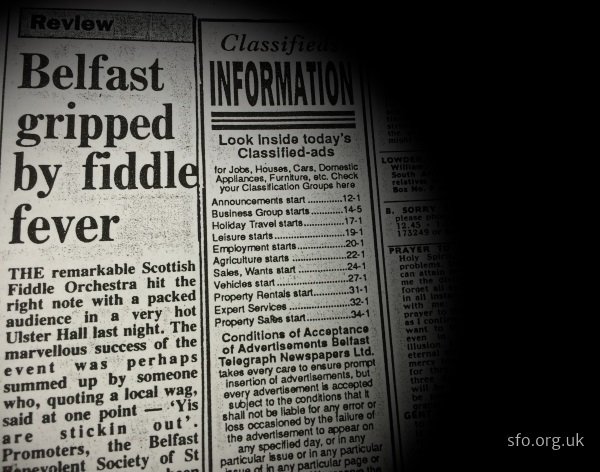