The SFO had a fantastic weekend in Orkney, with a concert in the Pickaquoy centre in Kirkwall on Saturday 15th August.

The concert was in aid of Friends of the Neuro Ward Aberdeen Royal Infirmary (Scottish Charity SC044430). 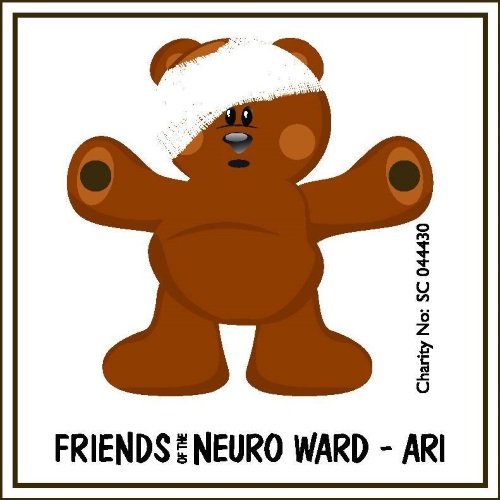 This is an Orkney-based charity, formed in 2013, which aims to raise money to help improve the facilities and equipment in the Neuro ward in Aberdeen Royal Infirmary. The ward is used by a wide range of people suffering from neuro disorders, including Parkinson’s, MS, MN and other rare auto-immune neuro diseases.

A coach, starting south of Glasgow at 9.00 am on Friday 14th August, travelled the length of the Scottish mainland, picking up players along the way in places such as Perth and Inverness. We were on the 7.30pm ferry from Gills Bay to St Margaret’s Hope in South Ronaldsay and, from there, various host families collected members of the orchestra, with further collection stops in Kirkwall and Stromness.

Orchestra members had Saturday morning free, some choosing to have a look around the shops in Kirkwall and visit St Magnus Cathedral, while others were taken by their hosts to various parts of the islands, including Skara Brae, Ring of Brodgar, Maeshowe and Yesnaby. 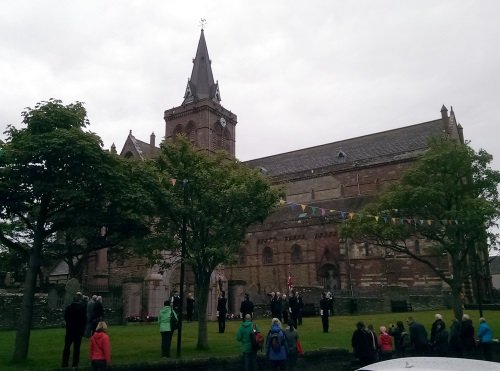 The orchestra then met for a rehearsal in the Pickaquoy Centre from 1.30pm and volunteers served a lovely evening meal of mince and tatties, followed by cheesecake.

The singers for the concert were Dennis Haggerty and Colette Ruddy. The concert also featured some of Orkney’s own supremely-talented young folk, all with the specific aim of raising money for the new intra-operative MRI imaging machine at the Neuro Ward. 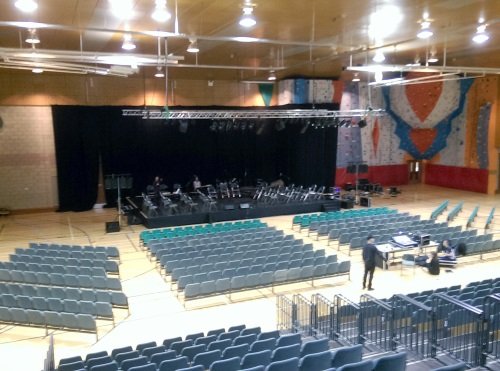 All set for the rehearsal at the Pickaquoy Centre.

Youngsters from the Orkney Traditional Music Project, Stromness Academy’s “Belt Hid Oot” (trans. “belt it out”) and Kirkwall Grammar’s “Hadhirgaan” (trans. “keep it going”) played selections of tunes from Orkney, Scotland and Scandinavia, much of it from memory. Their tutors Laura Eunson and Douglas Montgomery deserve great credit.

The concert ended with a stramash of all performers on stage, belting out the Eightsome Reel, uniting with the audience in Auld Lang Syne and then “helping the audience out the door” with a set of Swinging Reels. 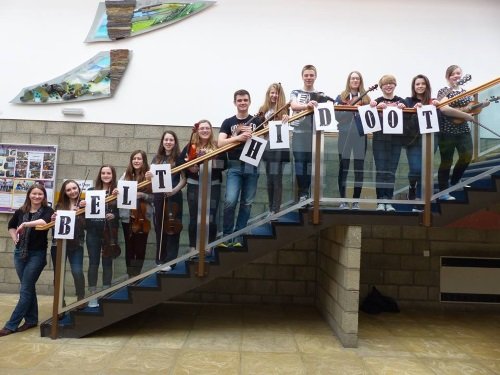 Over 700 folk supported the event, which could not have happened at all without input from a huge number of volunteers.

The orchestra and hosts went on to enjoy a lively ceilidh in the Albert Hotel after the concert. Some players even made it to the session in The Reel as well (which is where many of the young players had gone, directly from the concert).

It was a fairly early start on Sunday, catching the 11.15am ferry back to Caithness. In glorious sunny weather and gentle (for the Pentland Firth) seas, we had great views of Scapa Flow, Flotta and Hoy. Cape Wrath was also visible in the far distance, to the west. The ferry passed close by the uninhabited islands of Swona and Stroma, en route to Gills Bay. 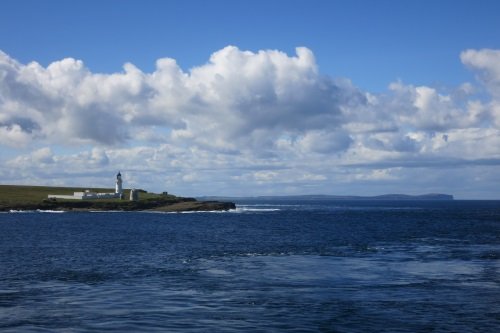 Stroma, with Dunnet Head behind.

After a quick soup and sandwich lunch, and souvenir stop at John O’ Groats, we began the long journey southwards.

Thanks – and how you can help

We all had a great time and the Orchestra would like to thank everyone in Orkney involved in the weekend and the concert. Our hosts were very kind to us and we hope the SFO visits Orkney to play another concert before too long.

If you would like to find out more about the Friends of the Neuro Ward Aberdeen Royal Infirmary – perhaps with a view to supporting their important work – you can find them on Facebook.