If you follow the Scottish Fiddle Orchestra on social media, you will know that our digital media manager, Alexander (Davidson), has been releasing snippets of information about the orchestra’s proposed tour, since the end of June 2019.

30 June: SFO TOUR 2020 – Throughout July we’re going to let you know our tour plans – keep your eyes peeled for exciting tour related news. Our first announcement will be on Tuesday!

02 July: So it’s official, we’ve booked our flights, and at the end of March 2020 we’re crossing the pond. We’ll be touring some of the North Eastern states and can barely contain our excitement! But that’s not all, we’ve another location to announce, but all in good time. Let’s all get excited first!

09 July: As well as touring some of the North Eastern states, we thought why not head over the border to Canada too! So, in April 2020 we’ll be playing in the Maritime Provinces. We’ll let you know specifics before the end of July. We know traditional music is popular over there and are looking forward to meeting some traditional inspired musicians.

12 July: In case you haven’t heard… last week we announced our plans to tour the Canadian Maritime Provinces and the USA next Spring! More specifically, we’re finalising plans to play in Massachusetts and Maine. If you’re a fan and live in Massachusetts or Maine, or know someone who does and would enjoy a night of fiddle music, please share! [Here we are playing a Boston Two-Step to get you in the mood].

16 July: The last time the SFO visited Canada we played in Toronto… This time we’re planning performances in New Brunswick and Nova Scotia! Here we are playing John Mason’s ‘One Hundred Thousand Welcomes’ and a set of jigs in the Molson amphitheater, Toronto. Please share with anyone you know in Canada!

A North American Tour to Celebrate the SFO’s 40th Anniversary

To celebrate the 40th anniversary of the SFO in 2020, we plan to tour eastern parts of the USA and Canada over 2 weeks in March and April.

The tour itinerary has still to be finalised but will include the states/provinces of Massachusetts, New Hampshire, Maine, New Brunswick, Nova Scotia and Quebec.

The map below comes with the disclaimer that it is probably: 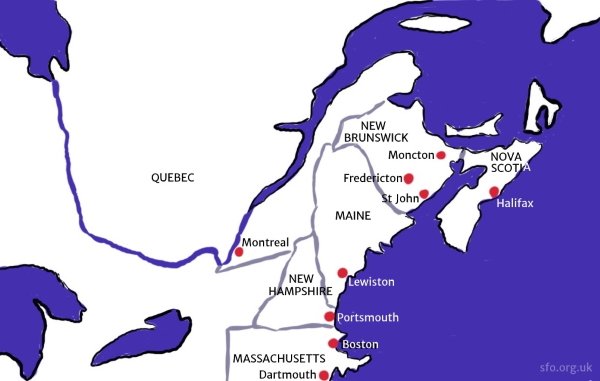 What we know for sure is that we will fly into Boston and fly out of Montreal 2 weeks later with great memories of new audiences, new friends, new venues and that unique experience of the SFO on tour – promoting Scotland’s traditional music wherever we go.

We’ll visit two great countries, each with strong links to Scotland and the UK – you only have to look at the place names to see that.

A social media post – on Twitter – gave one interesting “take” on a difference between the USA and Canada: 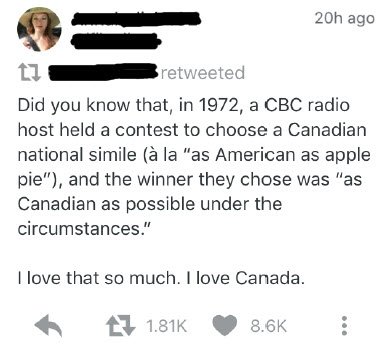 We’re looking forward to preserving and furthering the musical and cultural links between Scotland and Canada / USA.

This article was first published in the SFO’s Newsletter for September 2019.

Note that there is a specific page on this website – regularly updated – with information about the North America Tour, particularly the concert schedule and ticket details: click here.

Why not sign up to become a Friend of the SFO?

And it means you get our quarterly newsletter straight to your email inbox, as soon as it’s published.

Keep up to date with the latest SFO news and enjoy articles about the world of Scottish music and Fiddle music.

To become a Friend of the SFO, click here and it will take you to a page on the website which explains how it all works. All we ask for is a name and email address.