Imagine discovering that you are not the only person in the world with your first name.

For most of us, that’s not difficult to imagine at all. However, for the SFO’s principal soloist, Yla Steven, it came as bit of a shock.

As many visitors to this website will already know, most SFO concerts feature Yla playing a slow air, accompanied by the orchestra. This season’s programme includes John Mason’s composition, “Lament for the Death of the Rev. Archie Beaton”, with Yla taking the lead. 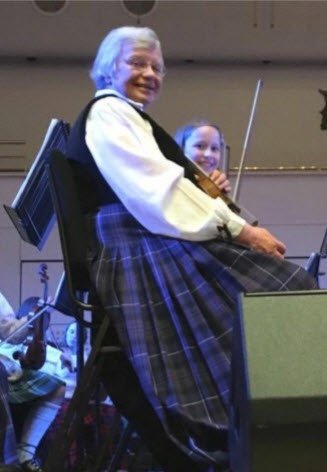 The Two Ylas in rehearsal.

Yla has performed solos with the SFO all over the world.

Yla’s influence is demonstrated not just in her playing but also in the way she has passed on her skills and knowledge to younger generations of violinists.

Until her retirement in 2010, Yla worked as an instrumental teacher in Edinburgh.

She has taught hundreds of students, several of whom have gone on to join the SFO. (The current management of the SFO includes 3 of Yla’s former pupils).

In 2015, Yla was awarded the British Empire Medal in the Queen’s Birthday Honours List for services to Scottish music.

Having taught violin to so many pupils, inevitably, Yla lost contact with a lot of them after they left school and moved away from the Edinburgh area.

One such pupil was Tudor Lloyd, who was one of Yla’s most talented students during the 1970s.

After decades of lost contact, Yla was delighted to receive, out of the blue, a card from “Tudor and Clan” at Christmas 2015. This included a note to the effect that Tudor was married with 3 children and living in the Midlands. His middle child, a daughter aged 11, had been called “Yla” in honour of his former teacher.

Not only that, Yla (junior) had been learning violin and was already up to Grade 6 standard.

As Yla (senior) says, “I was completely gobsmacked. It was disconcerting to find out all these things and then turn to the back of the card to see that it had been designed by ‘Yla Lloyd’. I was honoured that Tudor should name one of his two daughters after me.”

Yla (senior) quickly contacted Tudor to suggest that he and his family might like to come to see her playing with the SFO at their Nottingham concert in April 2016. He replied, saying that they already had tickets for the concert.

From there, it was only matter of time before arrangements were made for Yla (junior) to join the orchestra as a special guest for the Nottingham concert. 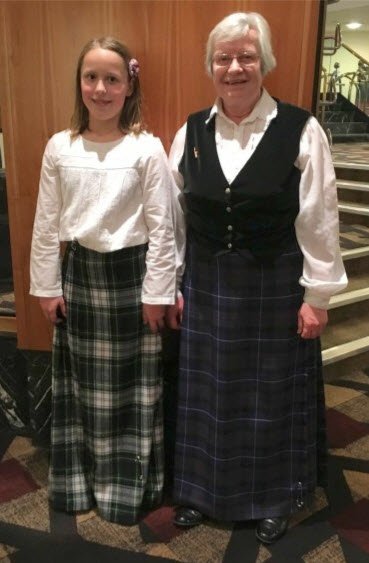 The Two Ylas ready for the SFO’s Nottingham concert.

The 2 Ylas sat side by side in the orchestra throughout the rehearsal and concert.

They received a special ovation from the audience for their efforts.

Yla (junior) has clearly been well brought up because, when questioned after the concert as to how much she had enjoyed the experience, she confirmed that the SFO is the best orchestra she has played with so far (!).

We wish Yla (junior) all the best with her future in music. May it bring her fun and friendship, in the way it has done for all of us in the SFO.

This article originally appeared in the SFO Newsletter for April 2016, which you can find and download from the “Join the Friends of the SFO” page of this website