(SFO Member, Peter Brash, explains how he discovered he had a surprising “personal” connection to a tune by Scottish Fiddle Music legend, James Scott Skinner).

Though it’s a few years since it featured in the SFO’s regular programme, Scott Skinner’s Cradle Song has often been played at SFO concerts.

Here’s what one concert programme said about the melody:

“James Scott Skinner was arguably the greatest Scottish Violinist / composer of all time.

Classically trained from an early age, he was conscious of the wealth of Scottish music and its popularity. He taught violin and dance throughout the north-east of Scotland and as a performer shared the stage with our greatest entertainers. Both he and Sir Harry Lauder took part in the opening of the London Pavilion Theatre.

His excellent compositions are a lasting testimony to his creative abilities.

Whilst teaching in Forres and staying in the local hotel he was returning to his room when he heard and saw a lovely young lady endeavouring to console to sleep her young child. The experience so moved him to write this simple and yet beautifully formed melody which has been used not only by performers but also as the music for more than one set of charming lyrics.”

When John Mason used to introduce the Cradle Song to audiences, he told an interesting story about it.

He would explain that the “young child” in the story had grown up to have a child of her own and he now played in the First Violin section of the orchestra – retired SFO member, Gordon MacGregor.

Gordon provides an interesting link back to a Scott Skinner tune which was first published in his Logie Collection of 1888.

Another of Skinner’s over-600 published tunes is Talisker, named after the distillery on the Isle of Skye.

Of course, the vast majority of fiddle tunes are named after people, places and events.

The tune, Talisker, appears as a reel and then a Strathspey, both published around 1882.  The link here is to the wonderfully stereotypical artwork which accompanied one published version of the tune.

It was only recently that I realised both tunes were stated to be dedicated to a “Roderick Kemp of Elgin”.  This seemed interesting to me because:

Why would a tune about Skye be dedicated to someone from Elgin?

An online search for “Talisker Kemp” gives you links to various articles which confirm that Roderick Kemp was a co-owner of Talisker from 1880. The previous owner had apparently been jailed for selling non-existent whisky to purchasers – who had assumed their spirit was maturing securely in Talisker’s bonded warehouses (!).

It was the name of Roderick Kemp’s business partner which was of most interest to me, however: Alexander Grigor Allan.

The solicitors’ firm where I work is called Grigor & Young. It was founded by William Grigor and Robert Young around 1828.

Alexander Grigor Allan was the nephew of Mr Grigor and we have a reasonable amount of archive information about him in the form of newspaper cuttings, especially relating to his death in 1893. 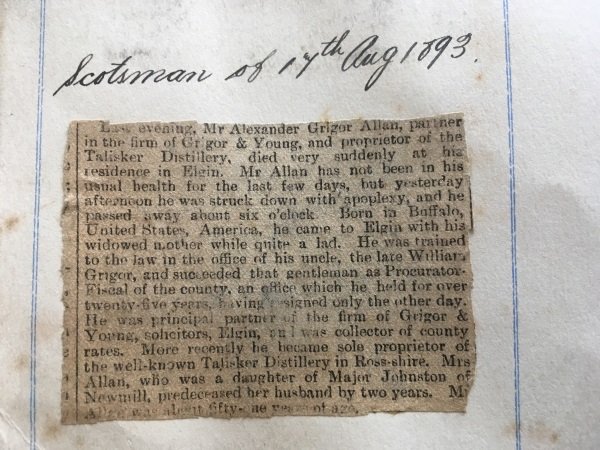 “The sad intelligence of the sudden death of Mr Alexander Grigor Allan, solicitor, The Haugh, Elgin, which occurred suddenly on Wednesday evening, after an illness of 3 hours’ duration, will be received with extreme regret in the North … The deceased, who was about 51 years of age, was born at Lake Forest in the United States, his father being in business there. On the death of the latter, he came while yet a mere boy to Elgin along with his widowed mother, and he received the main part of his education at Elgin Academy. He subsequently entered the office of his uncle, Mr Grigor, senior partner of the firm of Messrs Grigor & Young, solicitors, and at his death he was assumed as a partner … and some ten or eleven years ago he built as a private residence a beautiful castellated mansion on the banks of the Lossie. Mr Allan was an able and accomplished lawyer, and did much to build up the extensive business of the firm; but, in addition to his legal connection, he was a shareholder of Glenlossie and Talisker Distilleries. He indeed acquired Talisker distillery, in Skye, (recently) …He was President of the Society of Solicitors, and was much esteemed by his brethren at the Bar. He was married to a daughter of Major Johnston of Newmill, who died about two years ago, and he is survived by a son and a daughter and by his aged mother, who resides at Ivy Bank, Bishopmill, Elgin, for all of whom the utmost sympathy is expressed.”

The “castellated mansion” referred to in the newspaper article – and probably built in the early 1880s – later became the Mansion House Hotel. It’s interesting to speculate whether Scott Skinner ever played there. He probably did.

We know that, by 1882, Scott Skinner was married with two children and living in Elgin.

It was as a dancing master that he made his primary living and his dance teaching took him all over the north of Scotland.

He stated himself that, at that time, he “had the patronage of all the big private families in Ross-shire, Inverness-shire, Elginshire and Banffshire.”

His good fortune did not last, however, because he was declared bankrupt in 1885. It is thought that the 1884 publication of his Elgin Collection of his compositions (his most ambitious up to that time) contributed to his financial ruin. Skinner’s autobiography describes his downfall as coming suddenly. In a single day, he was “roofless, wifeless, and penniless”.

So, that’s a bit of a tenuous connection.

Scott Skinner wrote a tune for a man who was the co-owner of a distillery with another man who worked for the same business as I do,  125 years ago.

But it’s a connection, nevertheless.

We’d love to know of any personal connection YOU might have to a historic fiddle tune.

What’s the background and how did you find out about it? Get in touch with us and let us know.